Last Friday, Veeam made available to our VCSP partners the RTM of Update 2 for Backup & Replication 9.5 (Build 9.5.0.1038). Update 2 for Backup & Replication is what we term a breaking update, meaning that if a Cloud Connect client upgrades from the 9.5 GA (9.5.0.711) or Update 1 (9.5.0.823) this will break backup or replication functionality. With that in mind the RTM has been made available for our VCSP partners to ensure it is installed and tested before being pushed out to production before the GA release. Veeam Backup & Replication releases from 8.0 (build 8.0.0.817) can write backups to a cloud repository on 9.5 Update 2, and any release from 9.0 (build 9.0.0.902) can write replicas to a cloud host on 9.5 Update 2.

Update 2 is a fairly significant update and contains a number of enhancements and bug fixes with a lot of those enhancements aimed at improving the scalability of the Backup & Replication platform that VCSPs can take advantage of. The biggest and most anticipated update is for the support of the upcoming Veeam Agent for Microsoft Windows, but we also pushed out an awesome feature for our VCSPs to help manage their client or tenant Cloud Connect jobs or in fact manage their remote Veeam Backup & Replication instances with Remote Access. 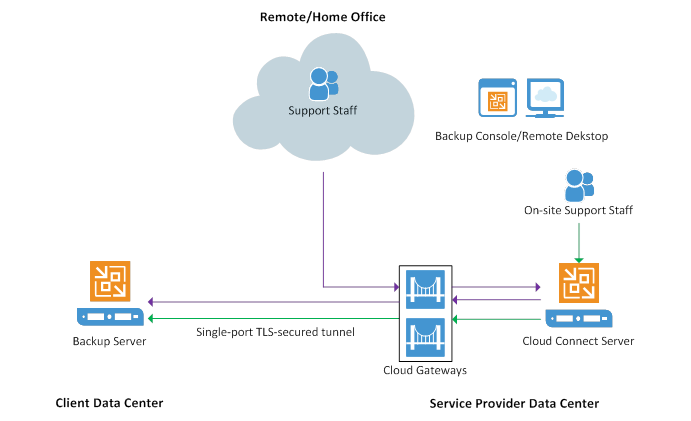 Below are the main VCSP related features and enhancements included in Update 2. For a full list, head to the Veeam Cloud and Service Provider channels of the Veeam forum. For VCSPs with more than 300 connections there is a post regarding tweaks for improving performance at scale.

Important Note for Veeam One Users:

Once again, this is an important update to apply for VCSPs running Cloud Connect services in preparation for the GA release which will happen in about two weeks. Once released I’ll link to the VeeamKB for a detailed look at the fixes but for the moment, if you have the ability to download the update do so and have it applied to your instances.